In September, we went on a rather long road trip along a small part of the vastness of Canada: we drove about 10600 kilometers in total, from Toronto to the Canadian Rockies and back, with a rather unhappy Ammu cat as the backseat passenger.

By the time we returned, fall was beginning to set in. While walking down Parliament Street on such a mildly cold early fall evening, I spotted an unusual looking bird by a marijuana store’s sign that wasn’t a usual urban sparrow or pigeon or goose. It looked like some kind of water or shore bird, with wader legs and long beaks that are peculiar to such birds. 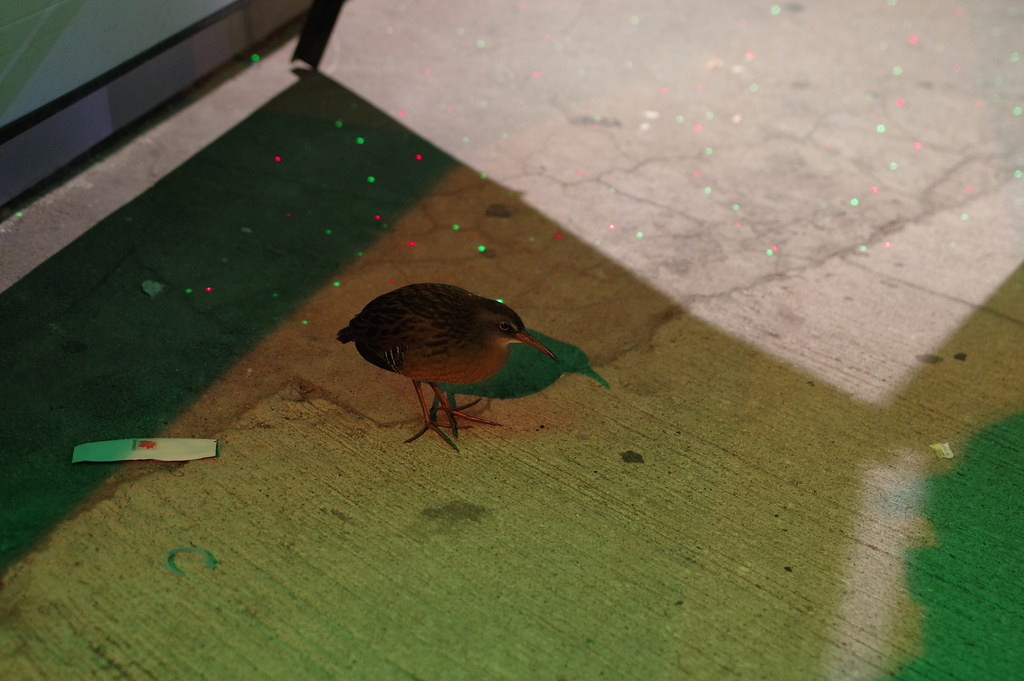 The bird looked lost. I was lost too: why is it there? What was it doing there? Is it somebody’s pet? Did a bird owner leave the bird outside, like dog owners do, while they were inside shopping for their daily dose of high?

I probably should have left the bird alone, but curiosity got the better of me. I took a picture, then I approached it, intending to take another picture. That spooked the bird: it ran into the store first, and then out onto the street. I worried about passing cars, so I followed it to the street. Both passing cars and the chasing human must have panicked the bird even more. It found no immediate place to hide. It ran to a side street. I followed the bird at what I judged to be a safe distance, just to make sure that it will be okay. This went on for a few minutes, with some passerby looking on and some joining the project, but most passing by. Eventually the bird took flight, and disappeared into the nearby tree-tops, thus ending the excitement.

That night I posted the picture above in iNaturalist, where someone helpfully identified the bird as a Virginia Rail, and offered an explanation as to why it was found it at such an odd place, away from its natural habitat: fall is migration time, where birds fly south to warmer climates, but sadly, city lights and buildings confuse and disorient them. Wikipedia says that “these birds remain fairly common despite continuing loss of habitat, but are secretive by nature and more often heard than seen.”

I felt sad for the confused Rail. I hope it has made its way to its wintering grounds safely. The powerful navigation equipment that birds acquired over a large span of time in evolution is no match for the obstacles set up by relatively recent human activity. Sometimes they collide with buildings and die: estimate is that hundreds of millions of birds die every year in the United States in this manner, as I recall from stuff I had seen in the Internet.

Houston Audubon Society has this to say:

Most North American migratory birds fly at night, and lights on buildings can disorient birds on their paths, resulting in fatal collisions. The Upper Texas Coast plays a key role on the Central Flyway, an important migratory path for birds. Birds that move along and across the Gulf of Mexico depend on safe passage through the Houston-Galveston area. Throughout migration, and particularly during storm fronts, turning Lights Out for Birds can make a big difference.

We encourage businesses, buildings, and individuals across the state to turn off all nonessential lights from 11 p.m. to 6 a.m. throughout spring and fall migration.

Research (PDF link) from Cornell Lab of Ornithology estimates that Chicago, Houston, and Dallas are the most dangerous cities for birds during spring and fall migration. Identifying these problems are a first step to finding solutions: Lights Out Texas project aims to reduce bird fatalities by reducing light pollution, and similar projects are underway elsewhere too. It is great to know that people care about things that really matter.

Speaking of migration, it is also time for us to move. It turns out that I too am prone to disorientation and confusion, just like the birds. I am currently experiencing it, as we are in the process of moving from Toronto to Houston. I do not quite know how I feel about the move. I am collecting my thoughts, and writing down some of it.

Toronto has been pretty nice, in spite of a very long time of Fourteen Days To Flatten The Curve: the core of the city is eminently walkable, it has many green spaces, it is lively and multicultural, and public transit is better than most North American cities. We disliked the vast suburban sprawl that surrounds Toronto (which is the subject of a book by John Sewell, former city councilor and mayor). We disliked driving in the city and in the suburbs. We like going on road trips, away from the city, but getting out of the Greater Toronto Area is not an easy process. So we kept our car parked for several moths, saving on insurance money. (We walked or took the public transit instead, and that indeed is a fantastic trade-off.) Because of the pandemic panic, we did not manage to make many new friends. We also missed out on the museums, festivals, much of the famed food scene, and whatever else it is that the city normally would have offered. Thus my perception of Toronto is colored by the pandemic.

In many ways, Houston is the opposite of Toronto: Houston is a city made for cars. Unlike Toronto, you can hardly spot pedestrians on the sidewalks of Houston, when there are sidewalks. You can’t plan on being able to walk to the grocery store or any other store. Many questionable choices have been made while “designing” Houston (if you can call haphazard sprawl a design) which made the city actively hostile to pedestrians and bicyclists and any street life other than cars and drivers. The person who runs “Not Just Bikes” YouTube channel (who himself moved from Canada to the Netherlands in order to be able to raise his children better) has explained the problem with Houston well, in a video titled Why City Design is Important (and Why I Hate Houston).

I suppose we could have chosen to stay in Toronto, learning to stop worrying and loving it, but the absurd growth of real estate prices have truly spooked us and impelled our move. Unless we’re willing to take on considerable long-term debt, we would not have been able to afford a house in Toronto or much of habitable Canada. Wages are relatively lower in Canada, and expenses are higher. While a case may be made in favor of immigration (because of the non-replacement levels of population growth in Canada, especially in places such as the Atlantic provinces), I do not believe that bringing in over a million of new people like us over the next three years, as announced by the federal government, is going to help with the demand-supply problem as far as wages and expenses are concerned. We would all mostly end up in Canada’s three major metro areas, increasing the downward pressure on wages and upward pressure on expenses.

Indeed, a good number of well-educated Canadians end up moving to the US, in pursuit of better economic and career opportunities. When an opportunity presented itself, we chose to do the same thing as they do. We have grown quite fond of the Canada that we have managed to see, so this has not been an easy choice.

So far this move has involved getting rid of an old place, getting rid of some old stuff, getting a new place, taking some flights between Canada and the US, a lot of driving between various cities in the two countries (moving previously-unmoved stuff from ye olde pre-pandemic times, stored away in various friends’ houses), and getting a lot of help from many friends, often staying in their homes for several days, hopefully not overstaying the welcome. It will also involve getting some new stuff, and fixing up an old house in order to make it actually habitable. And then we will be able to welcome friends to our home.

Does it sound like I am complaining about all this hardship? I am, in fact, fascinated by the choices that have been available to us, and the choices we have been making, and the trade-offs involved. I believe the study of choices and trade-offs is broadly called Economics.

It sounds fancy stated that way, but Economics might turn out to be a useful tool for me to make sense of this big confusing world. We will see.